Philip de László (1869-1937) was an Anglo-Hungarian painter known for his portraits of royalty and the aristocracy. He studied art in Paris, Budapest, and Munich, but most of his working life was spent in England, where he was sought-after as a portrait painter of high society. Among his subjects included the Bulgarian royal family, Pope Leo XIII, the king of England, Emperor Franz Joseph of Austria, the king of Spain, President Roosevelt, and the Kaiser. 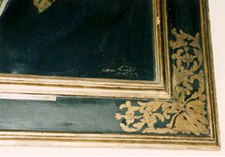 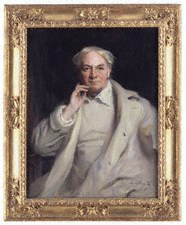 De László also used Baroque-style Spanish frames, usually of reverse section which brings the surface of the picture forward, in effect, towards the spectator, and thus creating a more dramatic impression of the painted subject. This style may have been chosen because the artist preferred to paint his sitters against a black ground. Their generally classical poses and costumes lent themselves to a Spanish setting. Such frames had already been popularized at the turn of the century by John Singer Sargent and William Orpen.

De László viewed the frame as a inseparable from the work of art and the process of creating a portrait. He would reportedly place a blank canvas in its frame prior to beginning a portrait as he believed the frame was an integral part of the painting and needed to be there from the beginning.

(adapted from "A note on Philip de László and picture framing" by Roberts, L.)