Sir Thomas Lawrence (1769-1830), was a prominent English portraitist of his time and President of the Royal Academy.

Some of his earliest works include these small oval pastel portraits, dating from the 1780's. 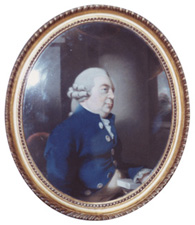 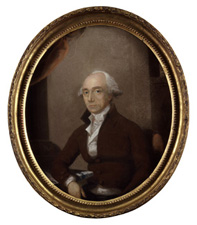 Lawrence took on the role of framing many of his portraits, usually according to his favored pattern style of the moment. He noted, ‘When selecting a Frame myself, I usually choose one pattern as most advantageous to my Pictures’, and 'its dimensions determined solely with a view to the advantage of the Pictures'.

Some of the most prominent patterns used by Lawrence are epitomized in the following portraits. Each style found favor with him for a decade or so, and served as almost a type of uniform, making his works more immediately recognizable as a 'Lawrence' which would surely have helped him stand out the annual exhibitions of the Royal Academy. 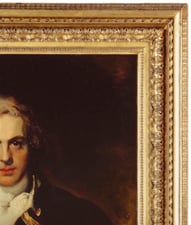 What is remarkable about this portrait is the traditional nature of its Italian style Carlo Maratta frame, which had been used in Britain since the 1750s. This frame was hand carved at a period of transition in frame-making the carver's trade was beginning to be undermined by mass-produced compo moldings. 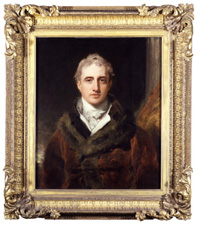 This frame represents a transition for Lawrence to a much heavier style that would remain characteristic of his frames in later decades. A French-inspired design, all the ornamentation is now constructed from compo, a hard plaster-based material. This pattern, with some minor variations is frequently featured in Lawrence's 17th century works, and with some modification, on the portraits of other artists. It was the introduction of compo that spurred the transition to deeper and wider frames because due to its lower cost as compared to carving. 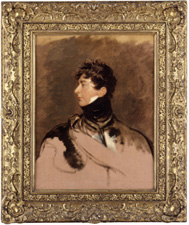 The freedom afforded by the use of compo was more apparent in the works of frame-makers in the decades that followed. In Lawrence's George IV, the emphasis has shifted from the corners to the surface pattern, in this instance a scrolling leaf motif which frequently appeared in decorative Regency designs. This type of design was highly influential, and was even borrowed by Lawrence's portraitist rival, Thomas Phillips, and many others. The inner frieze of stylized acorns and leaves is an additional innovation inspired by the popular furniture and architectural ornamentation of the day. The portrait itself is incomplete, revealing warm, pinkish priming. It is fascinating to note that this work was intended to be used as a profile on a medal which was ultimately never cast. The indulgent and overweight prince, who was frequently mocked as the 'Prince of Whales', scarcely appeared this elegant, leaving Lawrence with the unenviable task of defending the portrait as a true likeness. 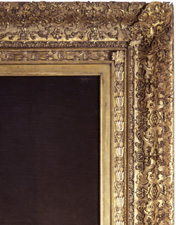 An additional stage in Lawrence's favored designs can be seen in this detail that significantly deemphasizes the prominence of the corners and entirely eliminates the center ornaments. This style was used in one form or another for portraits of all sizes but was most commonly featured on Lawrence's full- and half-lengths of the 1820s.

(adapted from "Thomas Lawrence and picture framing", by Penny, N.)